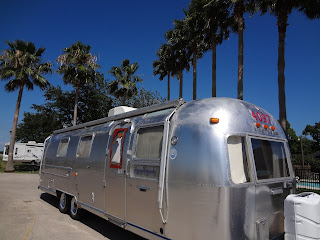 Check this out!  I'm lookin' mighty fine in this picture.  This was taken at an RV Campsite in Houston.  Sassy and Sweet!  Blue sky and Palm trees.."and the livin' is easy!"
Posted by The Journey of Gypsy Rhapsody and Minuet in G at 12:45 PM No comments: 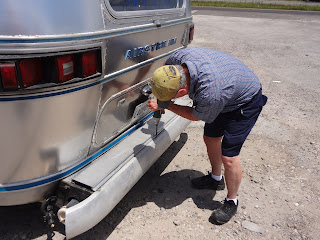 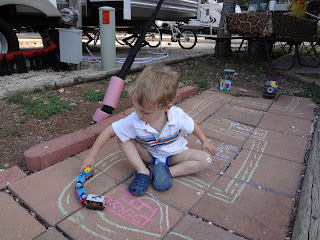 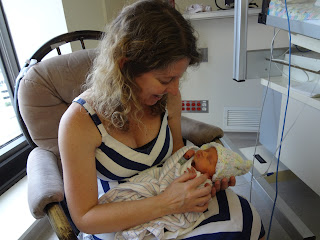 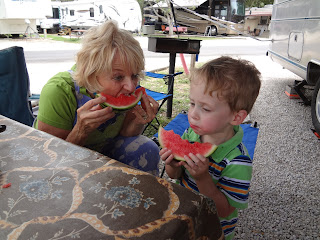 
OMG…so much has happened since I last wrote.  I’ll just have to list a few.


chugging along behind my friend for miles on I-10 heading to .


catches on one of those concrete things that protect  the pumps.  Vannie and


Dave didn’t seem to notice this catastrophe.  I was hollering as loud as I could


muster, but nobody was listening.  They must have had their radio up to the


limits.  You guessed it…my bumper was ripped off.  I do have to say I was thankful


for those concrete things, because, otherwise, there would have been a huge


mushroom cloud risen from I-10…and I would have been in  ashes.  When V and D


stopped to go into the gas station/restaurant to eat, that’s when they noticed


the damage.  Dave is just so handy and has all the right tools.  He jumped into


Robinson”.  There was also a little scrape on my back left hip…had a little of the


yellow paint on me from the concrete thing.  When we stopped in to stay


overnight, Dave just took a Brillo pad and cleaned up that yellow paint.


through was quiet an experience.  Big trucks, cars, and buses were speeding


by me on my left and right.  I just closed my eyes and prayed…and the Good Lord


got us through. V and D’s daughter,  Emilie, had called in the meantime and told them


that her water had broken and her doctor was putting her in the hospital. I could tell


they were a little worried…so they just hurried up a little more.  I was just trying to keep


up…and I did a dang good job, too.   The Lone Star RV Resort is going to my new home


for the summer.  It is really nice…pool and playground for the kids.  I dream about jumping


in a pool.  My silver skin can get pretty hot.  A little cooling off would be nice.  Oh well,


guess I just have to do that in my next life.


OK…Babies…Well, I should say just baby…there is only one.  Madeline Veda


Salvagio was born on June 2.  She was named after her 2 grandmothers.  She came a little


early so she is having to stay in the NICQ for a month or so.  Vannie said that she was


adorable.  I can hardly wait to meet her and have her sleepover in me.  I just love kids


and they seem to get a kick out of me, too.


3.        Bunches more…Vannie and Dave have been helping Emilie and Roy wherever they are


needed…and one of the areas of need is Vincent.  He is three.  He and I have become


best buds.  He plays outside beside me with his trains and monster trucks.  I just love


watching him.  He is a cutie pie.


for 3 days.  He learned all about how to fix my stuff, polish my silver skin, and much more.


I can’t wait till he can start sprucing me up even more than he already has.


I know there is more to be said, but I’m tired of thinking…Dave, Vannie, and I are just so


excited to finally be on our journey…into the wild blue yonder…over the mountain tops,


through the rivers (well, maybe not through, but that word sounds good), into the woods,


Posted by The Journey of Gypsy Rhapsody and Minuet in G at 8:27 AM No comments: