Paseo
(a leisurely walk or stroll, especially one taken in the evening)

...and what a evening stroll it was...
Vannie, Dave, and Bernice friends (Jimmye and Jo),
had an evening that practically blew their minds away.
Art, Science, and Technology in every direction in Taos...
...in Kit Carson Park...
...down the streets leading from the park...
...around the plaza...
...back of the plaza...
...in the John Dunn area...

I just wish I could have been there strolling...
but I'm just a wee bit too big.  Shucks... 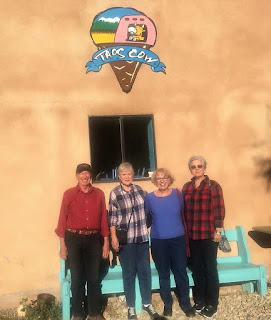 \
The Gang waved bye bye to me early.
They were on a mission to get ANOTHER fix of Taos Cow ice cream. 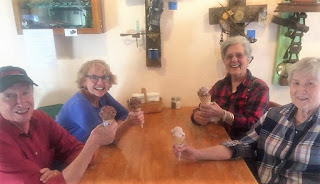 Jo had her heart set on raspberry chocolate...but, alas,
they were did not have that one available... 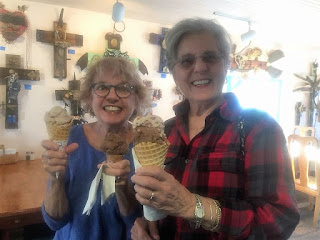 ...so she opted for the Rio Grande Chocolate with a dab of
cherry chocolate on top... 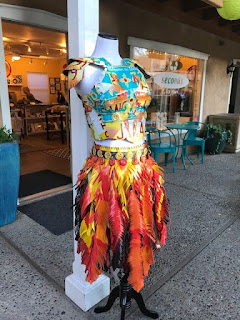 They made it to Taos...no worse for the wear after the supper consisting of ice cream.
The John Dunn Shops were having a recycled fashion exhibit.
Dave said there were some VERY interesting creations. 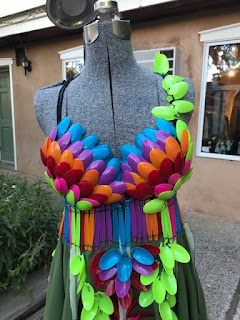 The plastic spoons gown was one of Vannie's faves. 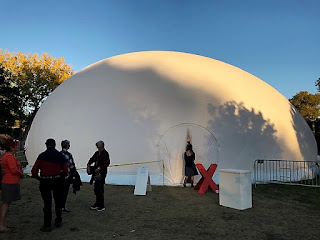 Then on to Kit Carson Park...
They wanted to be the first in line for the Space Cloud...
and they were. Surprise Surprise...
It was the "Clouds" first visit from Spain (where it was created)
to North America.
Vannie said that she and Ann Dalme (Lafayette Teacher Friend) made a smaller version
of this when they were teaching Gifted in Lafayette.
Their mentor, Nancy Ehert, had introduced them to the concept,
and they said, "Let's do it".
So...Spain don't have nothin' on them.!!!! 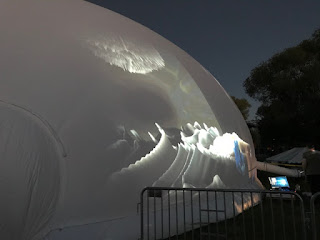 This one was definitely a bit more elaborate than their's.
The door keeper would not let The Gang enter until it got dark...
for obvious reasons.

It was held up by air and could accommodate several hundred people at one time.
Vannie's could hold about 12 max. 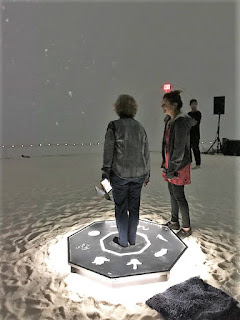 Inside were several stations where one could experience
a variety of science, art, and technology.
Vannie looks like she is about to "beam up". 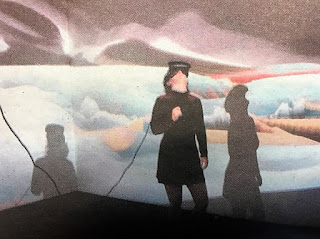 The virtual reality station was... 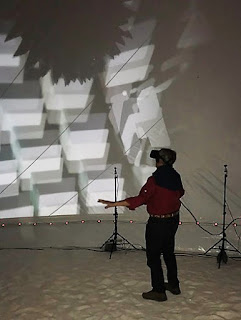 Dave said he was literally transported into the movie, Avatar...
expect with shapes, art, and space rather than with animals or plants or people. 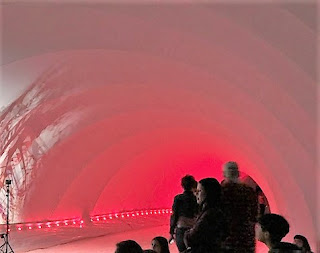 There were various tunnels leading The Gang to another experience. 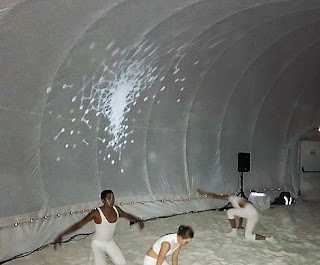 These dancers were interpreting the images projected on the wall,
along with the sound that they were experiencing. 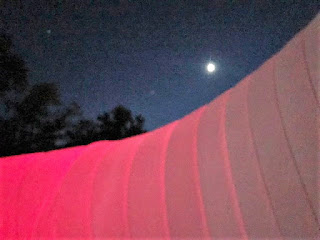 One tunnel led to an outside courtyard.
There were dancers and music.
The moon was becoming part of the adventure.
It was lighting the way to all the stations. 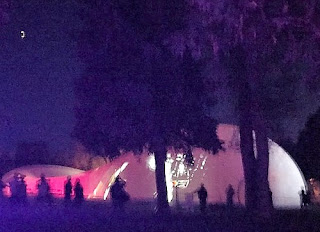 You can see the vastness of the Space Cloud in this picture. 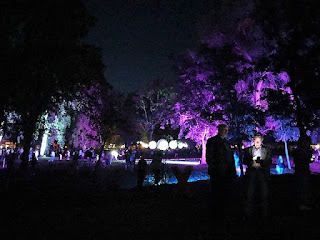 After leaving the Cloud, the Gang stumbled their way toward the rest of the park. 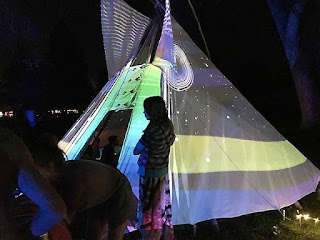 The Tepee
The local school kids had a project that included
using Tagtool (a computer program) to "paint" the outside
of this tepee with images that represented
indigenous and Western explorations of the universe. 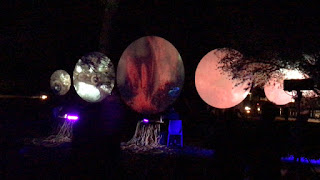 Circular Dimensions
This was a live laboratory of "microscopic video paintings"
performed with digital microscopes, 3D glasses and live projections. 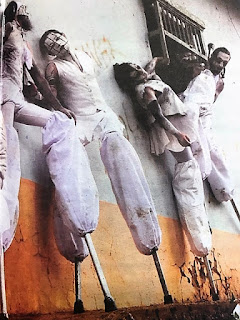 After leaving the park area...there was much more to experience.
This team of artists were from Bogota, Colombia and Albuquerque.
The Landscape Re-Invention Society
This group uses space and physical theater...
and they do it all on stilts. 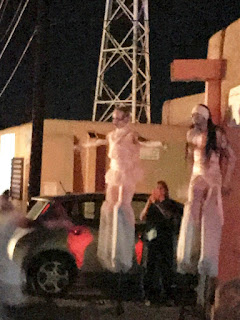 They move silently through the streets of Taos
re-inventing the architecture and space. 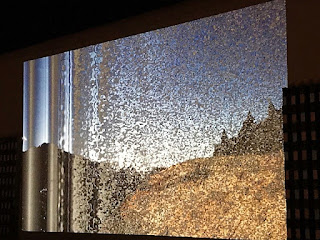 CauseLines: Coherence/Interference
An audience-generated sound and video performance
created in response to the nearby Chevron Questa Mine Superfund site. 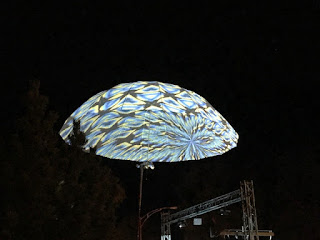 Virtual Umbrellas
What would Gene Kelly say about this? 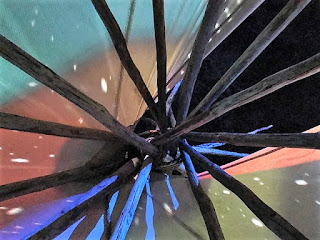 Looking up into the umbrella 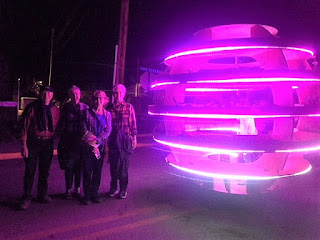 Cross-Pollination Portraits
Through coding and the use of electronic gaming
equipment, the audience engages in the
digital weaving of unique human features into oneness.
OK...coding, digital weaving... 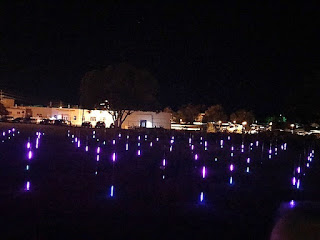 Gleamscape...
Musical instruments were used to send ripples of color
and 3D patterns across a vast landscape in Parr Field.
This was created right behind the plaza...next to the Catholic Church.

The evening was completed with a star gazing adventure .
...beside me (GR)
...right in Gloria Gonzales' RV Park.
The stars/planets were incredible....
...The Big Dipper
...The Bear
...Saturn
...Mars

The night sky over Questa was all part of The Paseo...
as least to Vannie, Dave, Jo, and Jimmye.

Posted by The Journey of Gypsy Rhapsody and Minuet in G at 3:01 PM 1 comment: