Gypsy Puts on a Shower Cap

Yep.. It's hard to get a shower cap on something my size, but it had to be done.  It hasn't rained in Lafayette since D and V made me apart of their family....until recently.  Well....I'm leaking....not too many places, but enough that something had to be done right away.  Dave and Vannie are going on a trip, so this will have to do until they return.  It's not the cutest thing in the world, but I guess I can stand it for a little while.  I didn't realize I was so vain...who'd a thunk it!
Posted by The Journey of Gypsy Rhapsody and Minuet in G at 1:01 PM No comments:

Light Up My Life

Dave "lighted" up my life in a whole new way.  He removed my old clouded light covers and created (from scratch) new light covers.  He engineered them out of fluorescent light defusers.  He also had to create (from scratch) mounting devices.  He used wooden drapery poles that he had craved out little notches to make it all work.  He is really a pretty handy guy to have around.
Posted by The Journey of Gypsy Rhapsody and Minuet in G at 6:22 PM 1 comment:

Gypsy Has a Sleepover

A sleepover...OMG...I can hardly stand it...Vannie and Dave said, "Who the heck cares if the plumbing still doesn't work... we are going to spend the night here tonight."  That was music to my windows (ears).

Dave got the thumbs up from Vannie to go ahead and buy that flat screen TV he has always been wanting.  Of course, before I came in the picture, he was thinking about a much bigger one.  He reinforced the wall that the TV would be mounted on, and installed that sucker in no time flat.  I have a built-in radio that works great and, also, an 8-track player.  Blast from the Past!  Dave picked up several 8-track cassettes at a junk store down the street, but, alas, it wouldn't work.  He thinks that maybe with a few adjustments, he can get it crankin' out some Willie Nelson when we are "On the Road Again".

While they were there, David took out his piano that he had stored under one of the beds and played a tune.  Nice...Nice...Nice!

The next morning they picked up breakfast at McDonald's (which is not far away) and enjoyed eating at my darling little table.  Cooper, D and V's grandson, had discovered 2 adorable folding chairs tucked away in a small opening on one of his visits.  Notice those in the pictures.

Even though they had to rough it a little more than they would have perfered with no plumbing, they managed to have a wonderful time.

GP
Posted by The Journey of Gypsy Rhapsody and Minuet in G at 4:04 PM 1 comment:

Just Some of my Parts 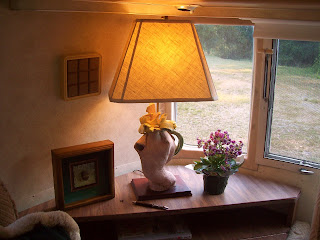 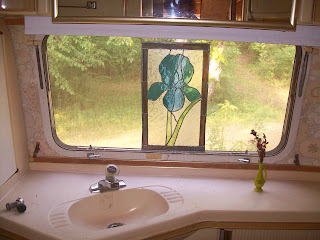 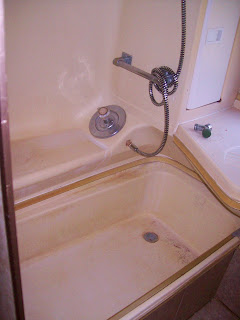 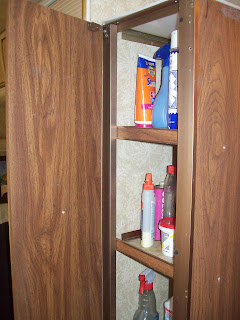 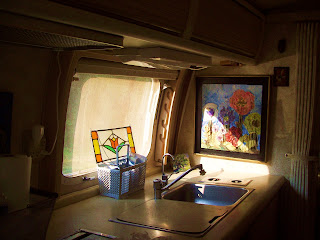 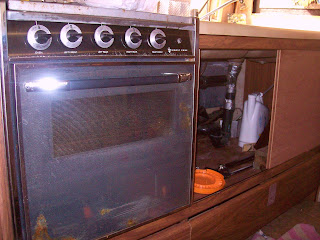 Good Morning,
Just wanted to show you some of my parts.  They are unique.  They actually look better in the pictures than they are in real life.  I guess you could say I am photogenic.  David is madly working on all my little crooks and crannies, and I'm just in "hog heaven"...feelin' younger every day.
Signing off with a song in my heart...La..La..La..
Gypsy Rhapsody
ps...You are going to see some of the "decorating" additions that D and V have added...paintings, lamps, etc.
So-o-o-o-o cute!
Posted by The Journey of Gypsy Rhapsody and Minuet in G at 8:12 AM 1 comment: 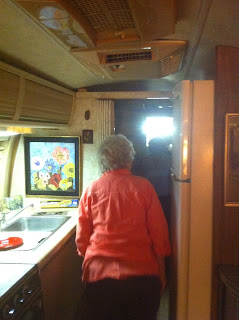 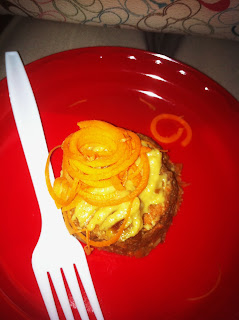 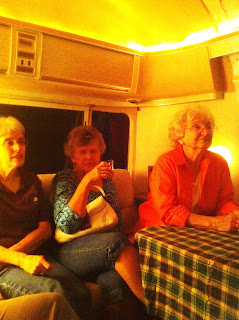 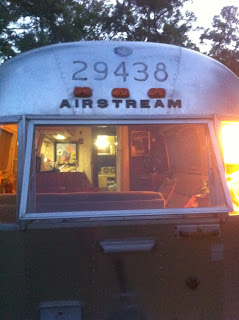 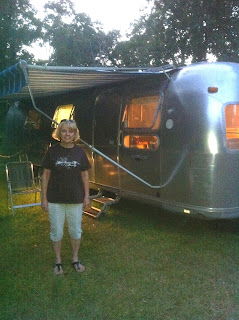 Vanette is a member of a group of ladies called GIFTS.  It's a spiritual group that focuses on supporting one another in their journey towards a closer walk with God.  I was tickled pink when they showed up to visit me late one afternoon.  The house was packed.  It felt so warm and cuddly.  There were eight ladies plus Dave.  Vanette had not told the ladies where they were going...just that it was an adventure and they would just have to trust and follow.  They were bowled over when they saw me.  I was so excited I almost started dancing.  The air was humming with activity, and I was the star!!!  "Mama told me there would be days like this!"

David had prepared a dessert...raw carrot cake.  Yes, you heard me right...RAW carrot cake.
D and V are in another special group that just eat "raw" food prepared in very special ways.  This is not meat...just nuts, fruit, veggies.  Healthy, I guess...anyway the ladies loved it.  They had a champagne toast after the dessert.  Vannie's friend, Nancy, had brought her a small bottle of holy water from Lourdes, so another friend, Madalyn, said a awesome prayer and anointed me with the holy water.  WOW...COOL...AWESOME!
"I'm in Heaven"!  You will have to excuse me...sometimes, I just have to break out in song!
Posted by The Journey of Gypsy Rhapsody and Minuet in G at 5:56 PM No comments: 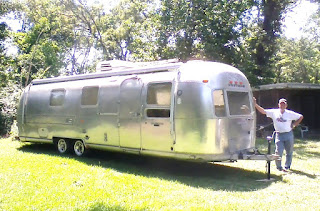 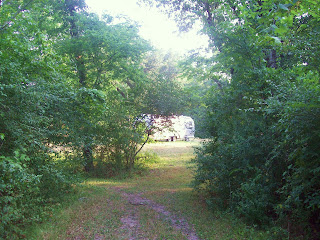 Just wanted to check in with several pics of my new home in Lafayette.  My friend, Doug, helped me get to my new location because D and V don't have a truck yet.  They bought a raffle ticket last week for a beautiful new truck, but, alas, didn't win.  In God's timing...just wish God could be a little faster.

"These things I plan won't happen right away.  Slowly, steadily, surely, the time approaches when the vision will be fulfilled.  If it seems slow, do not despair, for these things will surely come to pass.  Just be patient!"
Habakkuk 2:3 LB
Posted by The Journey of Gypsy Rhapsody and Minuet in G at 7:43 AM 2 comments: 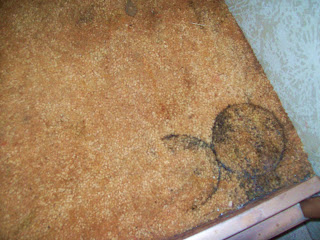 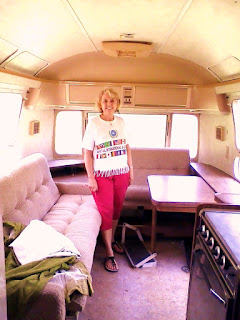 There's Vannie...looking happy as a lark...little does she know what she is about to fine lurking under the sofa and in the corners and crevices of me...mouse droppings, half eaten pecans from my squirrel friends, and just a lot of dirt and grime.  I'm not going to tell her now...she is just too happy.

Linoleum flooring is everywhere except under stuff, and guess what is there...orange shag...dirty orange shag...smelly orange shag.  Dave has started taking it out and I am already breathing better.  I think I overheard them saying something about bamboo flooring later on...sounds cool.  Their cousin, Kathryn, sent them a blog that mentions cork flooring...all sounds really uptown...nothing like that in Dry Prong.  I'm getting a face lift...slowly, jut surely.
Posted by The Journey of Gypsy Rhapsody and Minuet in G at 7:58 AM 1 comment: 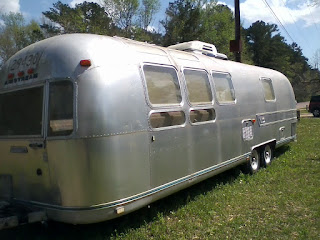 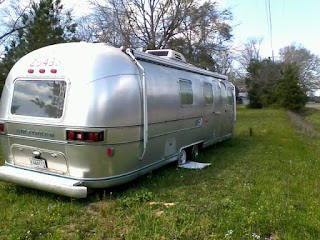 Spiders...mice...squirrels...dust...dirt...this was all part of my life until recently.  I have been RESCUED!  My new owners, David and Vanette Harris, saw me sitting on the side of the road in Dry Prong, LA back in April of this year.  They had decided to become full time RVer's, but had to sell their house before an RV could be purchased.  Houses aren't selling very well right now...so their dream was still that...just a dream.

But then they saw me!!!  I was looking pretty pitiful...weeds growing up around me, my tires had sunk into the ground, dirt covered me outside and inside.  But it was love at first sight!  They found the FOR SALE sign that had fallen off of my side and immediately called the number.  An offer was made and accepted, and my life changed in that instant.  I wasn't alone anymore.  I was a member of a family.  I BELONGED!

Since David and Vanette had no truck to pull me, a friend of theirs stepped up to the plate.  Their friend provided the truck and the time to do the job.  New tires were bought and put on and before you could say "Jack Robinson", my new life had started.  I was pulled down I49 to Lafayette, LA.  and have settled into my temporary home...another friend's campsite.  David and Vanette are only minutes away from me.  They are starting to clean me up, so when the house sells, I'll be ready for them to move in.  Hooray!  What fun this is going to be!

Oh...I almost forgot...my name...Gypsy Rhapsody...don't you just love it!  David came up with it.  He plays the piano and loves music.  I am singing for joy.  I have so much more to tell you.  David has been working on me since I arrived in Lafayette, but this post will have to do for now.

Just had to get started on my story...it's going to be a doosie!
Posted by The Journey of Gypsy Rhapsody and Minuet in G at 8:43 PM 3 comments: