By
Gypsy Rhapsody
The Party's over.
All good things must come to an end.
Se acabo la fiesta.
Todas las cosas Deben llegar a sur fin.
No matter how many ways you say it, it's never easy.
Tomorrow we will head out into the sunset for Texas and Louisiana.
It has been a great summer...but to tell you the truth, I am ready to get on the road.
Vannie and Dave have been running all over the place, and I have been pretty much put.  Now, don't get me wrong, I've loved it...but I am ready for some different scenery.
Of course, our last days here have been busy.
﻿

V and D took a little spin to Alamosa. CO and came back through Manasa.
This is the hometown of Jack Demsy, the famous boxer.
V said it was a great little museum honoring the hometown hero.

Gosh...a little rain had fallen. This was heading back to New Mexico from Colorado.

Berry pickin' time.
Mrs. Gonzales, our landlord, said these were champes or rosehips in English.
These bushes were full of beautiful wild roses  when we first arrived.
Now, there are little hips everywhere.  Lots of people are telling us that bears love them.
I think we are getting out of here just in time, because they are all around me.
Bears are cute, but I really don't want to see one.

Champes make for some yummy jelly.

More berry pickin'...These are raspberries.
V and D had to go over to a little town called Mora to get these little delights.

I love it when the friends come to see me.
Jerry Lautigar came over for a bowl of gumbo.
Remember last week I told you about meeting up with Jerry and a bunch of other Bernice folks.
The rest of the group had gone, but Jerry was still hanging around...so Vannie thought he needed a good home cooked meal.

More friends ...
Don't they look cozy sitting there on that sofa inside me.
I'm lovein' it!!!!
Loretta...Vannie...Vicki (Loretta's cousin)

I'm sorry...pictures with me and friends makes me feel all lovey-dovey.

As if there wasn't enough to do the last week we were here,
V and D added ballroom dance lessons.
This is them with Mark and Susan, their instructors.
Mark and Susan are from Forth Worth.

The lessons were at the Community House.
Look at Susan.
I'm hurting just looking at her.

After lessons, the class would head on down to the Mother Lode Saloon and practice.

There they are getting ready to "cut a rug.'
The rumba, the foxtrot, the waltz, and the tango

The Aspens are bursting out all over.

I just wish all of you reading my blog could be here to see this first hand.
Words can not describe it.
Beautiful, Magnificent, Fabulous, and on and on and on...
Good by, New Mexico
Hello, Texas and Louisiana
﻿
Posted by The Journey of Gypsy Rhapsody and Minuet in G at 4:00 PM 2 comments:

By
Gypsy Rhapsody
﻿
Vannie was all a-dither when she returned from the many
"art sightings" over the last several weeks.
The art in New Mexico reminds her of the art in Louisiana...it's just
all over the place.  Everywhere you look there's something "artsy"
going on.  It might be visual arts or it might be God's art.  You
just have to look around, and you've spotted it.
When she inserted her camera card in the computer,
I could see why she was so excited.
Take a look for yourself.
﻿

These first few pictures are from the Costilla, NM Fall Art Tour.
Costilla is north of Questa on Hwy.522...almost in Colorado.
This is Mitchell Silas...Navajo Sandpainter.
David said that this guy was so interesting to watch.  He could
put a little sand in his hand and create a masterpiece.

V and D said that some of these places didn't look like much on the outside...
but when you opened the door and walked inside...the magic happened.
Karen Ahlgren..watercolor artist

Check out this gallery...Created from an old church
Jaroso, CO

Another hole in the wall place...
The artist specialized in African musical instruments.

This gallery was also in Jaroso.  Jaroso used to be a much  bigger place.
It even used to have a hotel.  The train went through here.  This is right
downtown...notice the dirt roads.
The artist here is a sculptor.

OK...I had to look hard at this picture. Most of the gallery/house
is built underground...kind of like the earthships over in Taos.
That steeple is on top of the dirt "roof".  The partial building on
the right actually has stairs inside leading down to the living quarters.

This is such a New Mexico sight.
The old truck and covered wagon was at the earth house.
That's Ute Mountain in the background.

Another Art experience...
New Mexico State Fair
Dave in the Spanish Village.
Vannie said that the fair had several villages...
Spanish, Native American, African American.
All included food, art, dancing, singing, etc.
They got to ride the Senior Citizens bus to the fair...FREE.
...and it was dollar day...so a very inexpensive outing.

What?...The Blue Dog in New Mexico.
This was in the Education Building at the fair.
A student had recreated the Blue Dog.
Vannie said it seemed like she was looking at an old friend.

More of God's Art
The dahlia display at the fair

God is quite the artist.
The is Elephant Rock.  Dave said he was having a hard
time seeing the elephant.  Vannie said that the tallest part was
the top of the head, and the trunk goes down on the right.
Actually, I had a little trouble, too.  Maybe if you squint.

This is Snoopy Mountain in Questa.
The shadows, the aspens, the blue sky...pretty special

The "walk" continues.
Old Fechin Inn in Taos
Vannie had a children's book publishing workshop here.
It is now the Taos Art Museum.

How many colors does God have in his palette?
Unlimited...I guess.
This was taken right across from the museum in Taos.

Vannie said I had to include this sculpture.
She could relate to these ladies in all the right "places."
Taos, NM
V and D always LOVED the art walks in Lafayette.
New Mexico is no different.
Colors, Styles, Places, Creativity abound...
﻿
Posted by The Journey of Gypsy Rhapsody and Minuet in G at 12:24 PM No comments:

By
Gypsy Rhapsody
Well, Folks, Vannie left me with this phone.  Yes, I know what you are saying.  Gypsy, you don't know nothin' bout phones.  And you would be right...but...a girls gotta do what a girls gotta do...!!!
When I started getting these pictures on my phone, I was excited.  Vannie and Dave had another 4 days off in a row, so they headed to Rio Rancho, the home of Loretta's B and B.  I've talked about Loretta before.  She is a good friend that used to live in Lafayette.  They went to the same church...so when Loretta moved back home to New Mexico several years ago, V and D have visited her often.  It seems to be always a bunch of fun.﻿

When I got this picture on my phone, I knew immediately where they were.  They can't go through Rancho do Taos without stopping by San Francisco de Asis Mission Church.  Love this angle!!! I actually had my picture taken a couple of years ago by the church.  We are old friends.

Headed on down I25

They took a little different route along the Turquoise  Trail.
I kind of wondered what Dave was doing here.  What's he looking at?  V texted that this
was Cerrillos, NM.  It is an old mining town...turquoise, silver, gold.   Doesn't seem to be much left now.  I did "Google" Cerrillos and found out that a bunch of movies have been made right there on First Street.  Guess Dave was hoping for a movie crew to pass by...he could be an extra.

Next Picture I got was this one of Vannie.  Said they were now in Madrid, NM.
Madrid is a cute little artsy community.

Lots of little shops and houses along one main street.

What in the World???
Is this who I think it is?
Breaking Bad Stars...
Skyler, Walter, Walter, Jr
Yep...Breaking Bad was filmed in Albuquerque...all of a sudden, V was sending me pictures of places from the TV show.

Oh my Goodness...the carwash that Skyler and Walter bought.

V, D, and Loretta had lunch at the Dog House...Another Breaking Bad hangout.
V and D have been eating healthy...somehow, I don't think this place would quality as healthy.

Vannie was texting me fast and furious...They seemed to be hitting the hot spots around town.
Albuquerque Transportation Center
Amtrak, City Buses, Etc.
Architecture is similar to a hotel that was originally on the site, the Alvarado Hotel.

Bart Prince House
Bart Prince was the architect.
When I got this picture, I wasn't sure they were still in New Mexico.
Weird...but interesting.
Seems that Mr. Prince designs his houses from the inside out.  OK???
Guess that explains everything!!!!

On the way to Acoma, Sky City
V seems to like taking pictures of roads.
Whatever floats your boat!!!

The Acoma Pueblo ... Acoma meaning "a place that always was"
60 miles west of Albuquerque
located 365 feet high on the top of a mesa
V said this was the ladder leading to a kiva, used for religious ceremonies.
I couldn't help but notice that stove sitting on the roof.  Just wondering what that is all about. 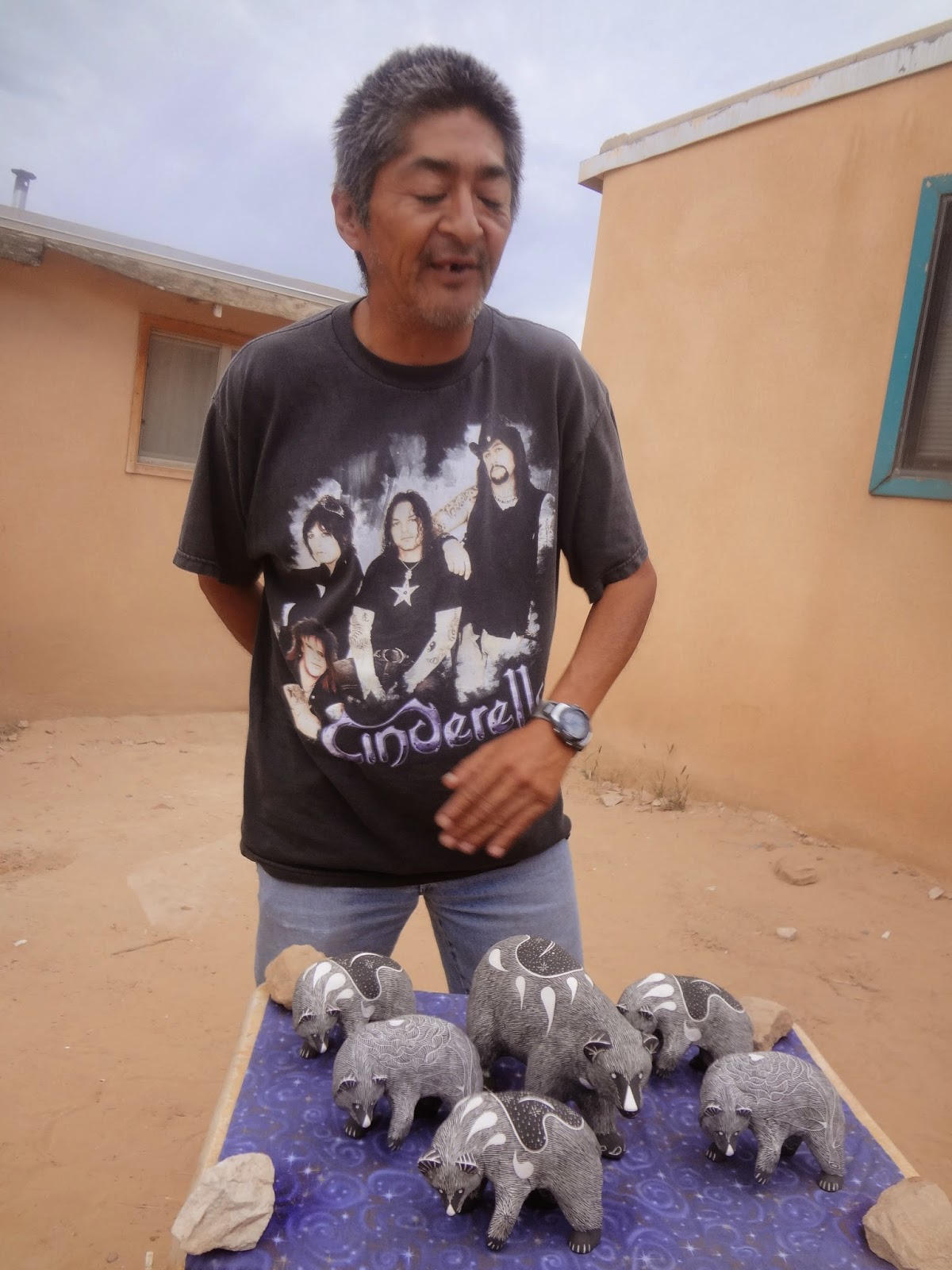 Dave said that the Acoma Natives are famous for their pottery.

Vannie said that there were about 300 two/three story buildings...with 30 people living permanently in the pueblo.

Dinosaur Rock
Well, by George, it does look like a dinosaur.

On the way home...got this picture from Tesuque, NM...
If I had a mouth...it would be burning now.
I sure was glad to see V and D ...
but having the phone was a plus...
Made my time alone to go by faster.
﻿
Posted by The Journey of Gypsy Rhapsody and Minuet in G at 4:13 PM 1 comment: