ORIGAMI IN THE GARDEN...with a little haiku on the side 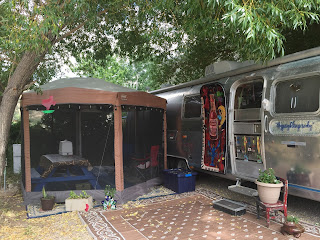 The Japanese are such gracious and giving people.
They have shared many things with us,
but two things that I love are origami and haiku.
Ori means folding, and gami means paper...
the art of folding paper in Japan.
Haiku is a Japanese verse in three lines.  It is a
short poem that captures a feeling or image.
A reference to the season is an essential element of haiku.
(FYI..I don't always get the season thing in mine.
So I guess you could say, when it comes to haiku...
I'm not a purest.)
Origami and Haiku seem to go hand in hand.
I am going to attempt to share both with you today.
"Origami in the Garden" is a wonderful exhibit
right outside of Santa Fe along the Turquoise Trail.
Vannie and Dave found out about it online,
so they could hardly wait to say "bye" to me and head
out to discover this amazing exhibit.
Kevin Box, along with his wife, Jennifer, have
created a one-of-a-kind exhibit that features Kevin's
ingenious creations of "paper into metal".
Come along with me on my "show and tell" with origami and haiku.
﻿

Is Dave trying to be an origami piece himself?
I wonder???

Old olive branches
Raising the boat to the sky
As a peace offering
Olive trees grew in this area, but the Kevin and his wife
had to remove them because of the amount of water they needed.
He  made casts of the branches and has incorporated them in his origami creations.

Up, Up, and Away
Swirling, rolling, and turning
Reflecting glory

V and D's guide was Natalie Padilla.
V said she was awesome.
Who is that little old lady with the umbrella?
Oh my goodness, that's Vannie.

Olive branches incorporated into this creation. 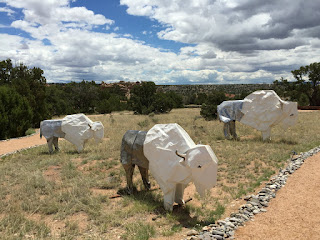 Majestic creatures
Made of paper then metal
Strong, bold, powerful 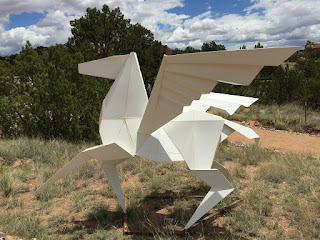 Tower of Babble
A Bible story of old
Birds of a feather
This tower is 25 feet tall.  It is created with 1000 stainless steel cranes.
...Five hundred at the monument and 500 around the world as individual pieces... 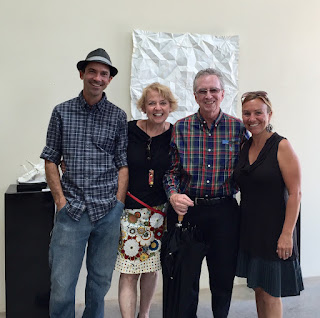 Kevin and Jennifer Box with V and D
Dave said that these were some mighty friendly people.

V and D, again, with Natalie...
These guys were feelin' the love.

One piece of paper
Folding, bending, measuring
Appearing magic
origamiinthegarden.com
...also, check out Kevin Box online...
Kevin and Jennifer are negotiating with botanical gardens
around the country.  Look for their next exhibit at a garden near you.
﻿
Posted by The Journey of Gypsy Rhapsody and Minuet in G at 2:32 PM 2 comments:

Vannie and Dave's grandson, Vincent, is a car fanatic.
He loves to collect them.  He loves to play with them.
He loves to take them places.  He loves everything about them.
He is six years old, but Vannie said that he has been this way
since he was a little bitty tike.

Of course, when he was old enough to watch a movie..."Cars", it was.
Would you believe the category that this movie falls into...
"completely-animated comedy-adventure sports film".
It is also the second Pixar film (after A Bug's Life) to have an entirely non-human cast.

The Star is Lightning McQueen.
His side-kick is an old tow truck named Mater.
Other characters include Doc Hudson and Sally Carrera.
So why am I going on and on about "Cars"?
...because Vannie and Dave had the time of
their lives looking and (sometimes) touching
the stars of the Red River Car Show several weeks ago.
They were thinking about Vincent and wishing that
he could be there with them.  They have played cars with him,
and watched the movie more than once with him.
Hey, I've got a copy of that movie of my very own.
When Vincent sleeps over, he loves to sit in bed, watch the movie,
and eat snacks.  His sister, Maddie, prefers "Nemo", but
she goes along with whatever he wants....most of the time.
I'm going to throw in a few "Cars" quotes to go along with these pictures.

"You know, some automotive yoga could
really lower your RPM's, Mam."
(Vannie had a VW just like this one when she went to LA Tech.)

"I thought I'd stop and stay a while.
I hear this place is back on the map."

"I've got more talent in one lugnut than a lot of cars
have in their whole body."

"I eat losers for breakfast."

"Oh, for the love of Chrysler! Can we please ask
someone for directions?"

"Ain't no need to watch where I'm goin',
just need to know where I've been."

"I'm a precision instrument of speed and aerodynamics."

"I am in Radiator Springs,
the cutest little town in Carburetor County."

"Roads didn't cut through the land like interstate highways.
Roads moved with the land...they rose, fell, and curved.
We didn't drive on them to make great time.
We drove on them to have a great time."

I had to put two pics of this cutie pie.
I could relate to this one most of all.

Round and Round we go...
where we stop, nobody knows.
Look closely...V is bending down to take the picture...
Dave is in the background...
There's that blue New Mexico sky glowing.
Time for a coke and a snack.

Posted by The Journey of Gypsy Rhapsody and Minuet in G at 9:27 PM 1 comment:

..Saturday Night Date..
Vannie and Dave still enjoy
a good "date night".
They had read about some special music
going on at the Taos Black Mesa Winery...
and good music on a Saturday night
sounds like a winner.
It was the perfect night to head out to Taos,
so I pushed them out the door.
They returned with such great pics,
I just had to spread my wings,
and create a poem.
Here goes....

Saturday night there was a gentle rain,
making the air seem fresh and clean.

The breeze was coming over the mountains
smelling of pine, fir and cedar.

A rainbow...a sign...a story from long ago..
an arche enveloping the world with it's beauty.

Driving into Taos, the clouds
were sculptures in the sky...

shapes of castles and dragons and fairies.

Off the beaten path...
flowers bloomed in glorious colors of red...

Home
﻿
Posted by The Journey of Gypsy Rhapsody and Minuet in G at 8:13 AM 3 comments:

SURELY THE LORD IS IN THIS PLACE

Last year I told you about the Questa
Catholic Church, San Antonio de Padua Church,
that was being renovated by the parishioners. 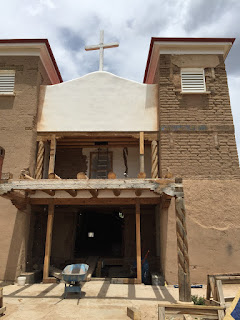 They are still working on it, and
Vannie and Dave stopped in to check out their progress.
There was a wonderful article in the Taos News.
While the parishioners and community members are
busy renovating, another group is working on
creating new stained glass windows.

Marcus Rael is heading up the window's team.
The article stated that he got inspiration from a pilgrimage.
One window will depict the church's patron saint, San Antonio.
Other windows will depict San Ysidro, Our Lady of Guadalupe and the Christ child.
The renovation project has been going on for 5 years.
The parishioners hope to celebrate Christmas in the new church.
Vannie said that when she was walking through the church,
a song came to mind..."Surely the Lord is in This Place" by
Lanny Wolfe.

In the midst of His children the Lord said He would be.
It doesn't take very many; it can be just two or three.
And I feel that same sweet spirit that I felt often times before.
Surely I can say I've been with the Lord.

There's a holy hush around us as God's glory feels this place.
I've touched the hem of His garment,
I can almost see His face.
And my heart is overflowing with the fullness of His joy.
I know without a doubt that the Lord is in this place. 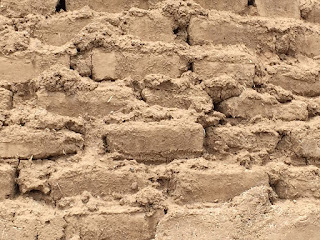