...AND I ALMOST VOTED

By:
Gypsy Rhapsody
(a 1977 Airstream that probably could have voted
if her name had gotten into the hands of the right folks)

Of course, I really didn't vote.
Inanimate objects can not vote in America...unless... ... ...
Vannie and Dave didn't want to haul me down to the courthouse.
People would have stared and pointed and yelled at me...and them.

But voting did happen, and we have a new president.
Some are happy and some are sad...
and that's all I am going to say about that.

We got back into Hillsboro, TX the last week of October.
When we spotted the tip top of the Hill County Courthouse,
we started shouting for joy.  We were beginning to think
someone had moved Hillsboro. 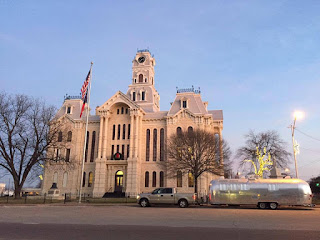 Driving across Texas can
make you a little delirious.  Miles of miles of highway...cattle ranches...
cotton fields...oil derricks...telephone poles...small one-horse towns...
hole-in-wall cafes...and Vannie says if you want to get the worse
coffee in the world...order a cup in west Texas.  Of course,
coming from Louisiana, where the coffee sticks to your ribs,
west Texas coffee is like drinking tea.

We rolled into NTAC (North Texas Airstream Community),
and I instantly felt at home.
We took a deep breathe and said "Hallelujah". 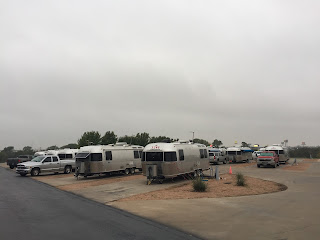 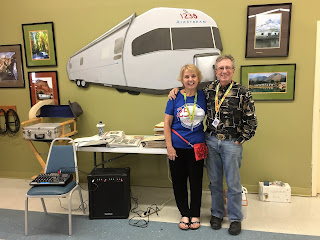 Guess I need to back up a bit...and catch all of you up on what's been happening
between the time V and D left Las Vegas till now.
I'll try to be brief...

If you remember, I was still in Albuquerque,NM,
and Vannie and Dave had been traveling with Jan Chester out west.
After Las Vegas, Jan and Chester flew back to Lafayette,
and V and D headed back to pick me up in Albuquerque.
They had a few sights they wanted to see on the way back,
so I include a few of those pics. 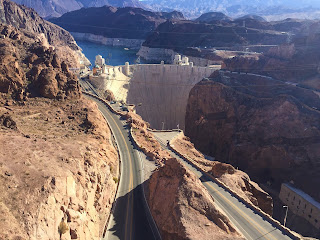 Hoover Dam
"That "dam" is pretty "damn" big.
I know, I know...all those jokes about the "damn dam".
I just can't help myself. 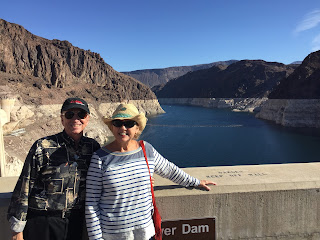 Hoover Dam is 726 feet high.  It is 650 feet thick at the bottom,
and 45 feet thick at the top. (I've got a big bottom myself.)
It was constructed between 1931-1936 during
the Great Depression at a cost of $49 million.  Think what it would cost today.
The purpose of the dam is for power, silt and flood control, irrigation,
and water.  It is the world's largest hydroelectric power station.
It is near Boulder City, Nevada. 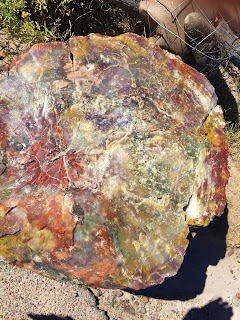 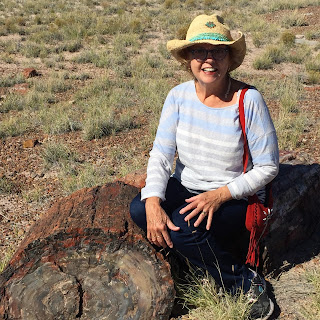 Vannie said that it was amazing how the logs retained their shape
over millions of years. 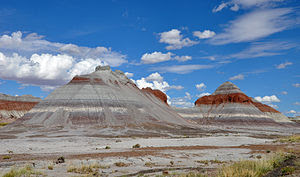 The majestic Tepees
Layers of colorful rocks
Years in the making 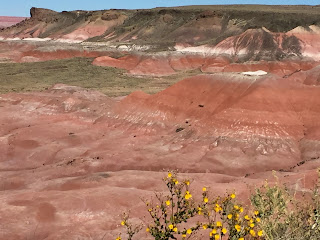 The Painted Desert is part of the Petrified Forest National Park. 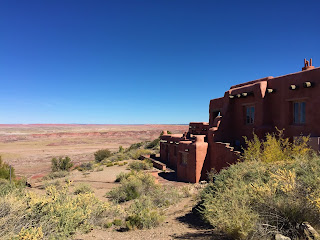 Painted Desert Inn
Vannie said it is used as a museum today.
It was constructed back in the 30's by the CCC.
(Civilian Conservation Corp)
The architect was Mary Jane Colter,
who designed the Bright Angel Lodge in the Grand Canyon.
That's where V and D stayed during their Grand Canyon adventure. 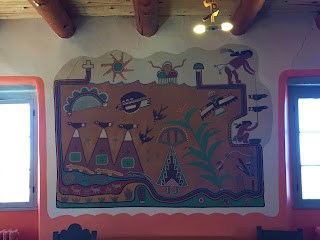 This is one of the murals created by Hopi artist, Fred Kabotie. 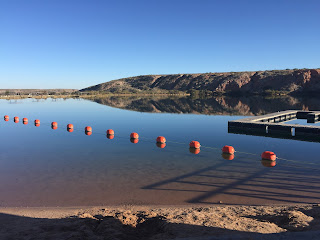 After the Painted Desert, Vannie and Dave headed to Albuquerque
and were reunited with me.  Boy, was I glad to see them.
Our first stop was the Bottomless Lake State Park east of Roswell, NM.
Beautiful spot...did not see any flying saucers or alien beings...thank goodness. 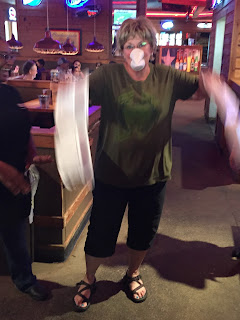 Guess you might could call this an alien being...
NO...that's V and D's friend Dorothy Jowers.
Vannie said it was Dorothy's birthday, so they went out to eat
at Texas Roadhouse in Odessa, TX.   When they told the waitress that it was
Dorothy's birthday, they were expecting a free piece of cake...
but they got THIS.  Dave said he still thought the cake was coming,
but it never did.  The moral of this story is don't mention birthdays
at Texas Roadhouse unless you want to act like a chicken...
and get NO cake. 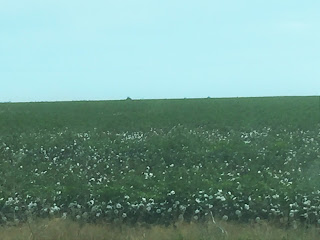 Here's one of those cotton fields... 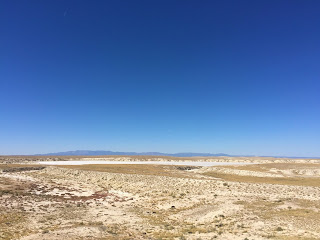 I was surprised about this.
Dave said it was a salt lake.
Can you see that white line close to the horizon?
That's the salt lake.  Vannie said there were several in the area
between Odessa and Brownwood. 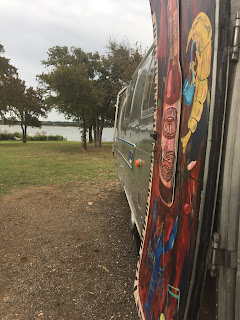 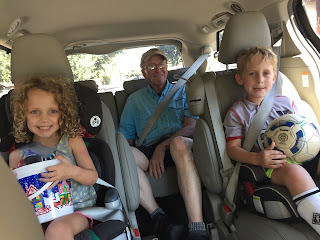 As soon as we made it back to Hillsboro...
Vannie and Dave started thinking about seeing those
grandkids in Austin.
Heading to Vincent's soccer game. 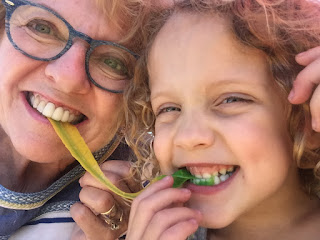 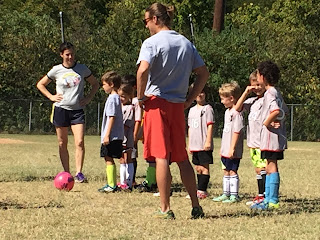 Vincent is "dynamite" on the soccer field.
He is 3rd from the right. 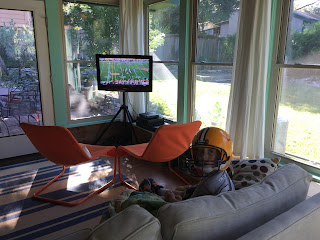 Back at Emilie's watching the Saturday afternoon football came
between UT and Baylor.
Vannie said it was so cool how Vincent has to get in character for the game.
UT 35 and Baylor 34 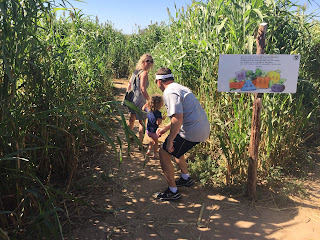 A Cornfield Maze...
You've heard about those...
Well, V and D and the fam visited one in Buda, TX...south of Austin. 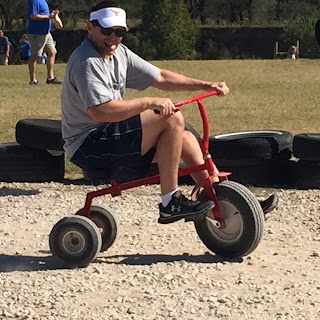 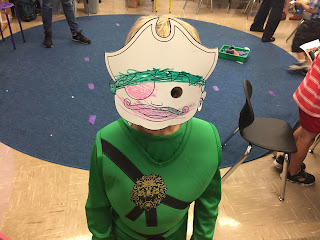 Visiting Vincent's 1st grade classroom for the Halloween party
was a highlight of the weekend.
Guess who this is???? 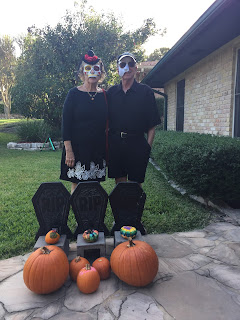 Good Lordy Mercy
I've been having bad dreams ever since seeing this photo. 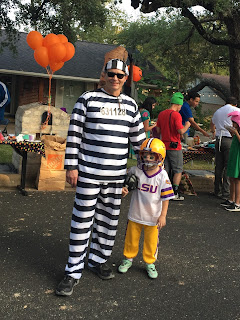 Austin Neighborhood Halloween Party...
The Jailbird and the Football Player 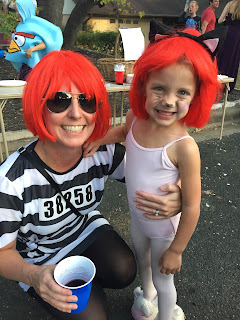 These are the cutest redheads EVER... 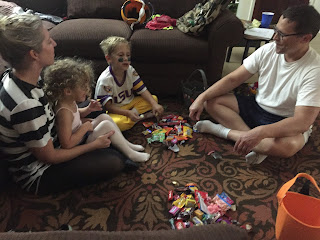 ...and the examining of the loot...
Mommy and Daddy have the right to pick out several of their faves.
Emilie said it was just part of being the Mommy and Daddy.
Snickers...Milky Ways...Millionaires...etc. etc.etc. 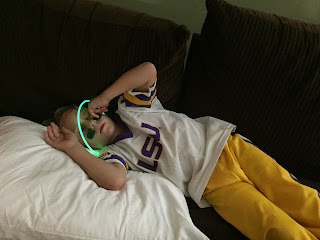 Thank goodness Halloween only comes once a year.

Good to be back in Texas, Folks
Loved all our travels, but need a little R and R for a few weeks.

Posted by The Journey of Gypsy Rhapsody and Minuet in G at 12:00 PM 2 comments: